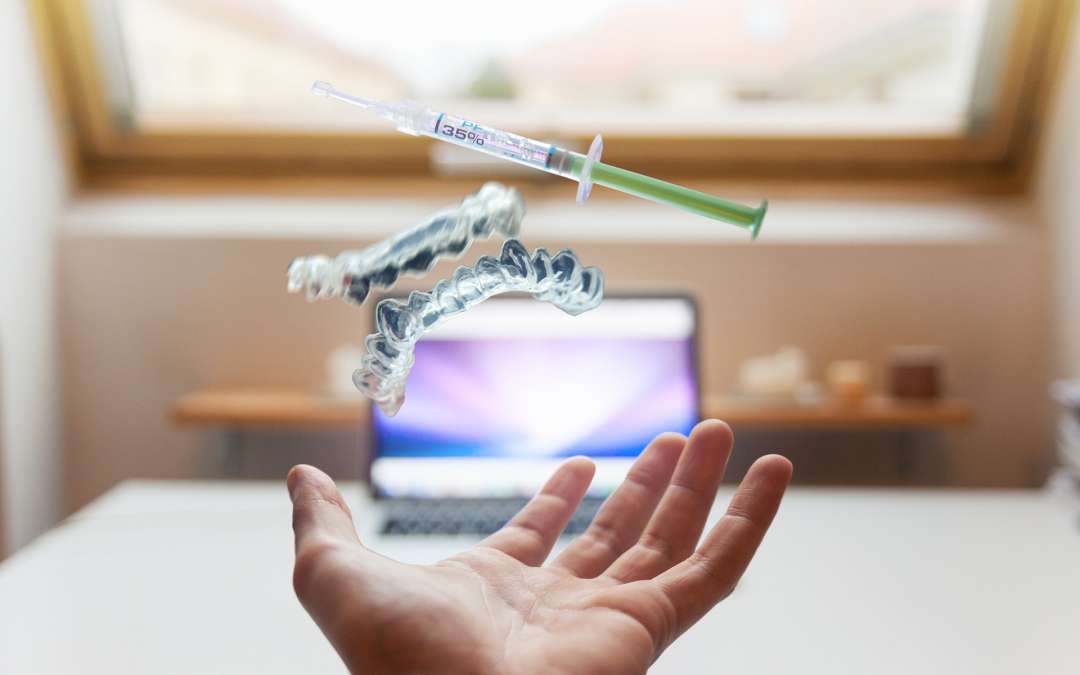 Oral cancer kills over 9,750 people every year in the United States alone. That’s over one per hour, year-round.

The high mortality rate of oral cancer is a result of the fact that it’s most often discovered when already in later stages.

Today, we’re going to take a look at the various causes of oral cancer, what symptoms may develop as a result, and how to test for it. Let’s get right into the oncologic details.

Tobacco use is one of the most prominent risk factors for developing oral cancer. While cigarettes and cigars might be the first thing that comes to mind, it’s worth noting that smokeless tobacco can pose the same risks.

While it’s unfortunate that tobacco is such a common cause of oral cancer, there’s a silver lining to this harsh truth since prevention can be as simple as not using tobacco. Don’t start using it, and if you already are, put a stop to it before it’s too late.

While smoking is the most commonly associated risk factor for the development of oral cancer, alcohol can also put you in harm’s way. When you drink alcohol — especially excessively — on a chronic basis then the cells in your mouth will be irritated.

This irritation can leave the cells vulnerable to oral cancer. You should completely avoid alcohol if possible, but if you must drink, then do so in moderation— two drinks per day if you’re a male who’s 65 years of age or younger. Men over 65 or women of any age should stick to one.

In addition to the usual suspects such as tobacco and alcohol, certain strains of HPV could also put you at an increased risk of developing oral cancer. This means that men are at a higher risk of HPV-induced oral cancer seeing as the STD is more prevalent in males.

The virus is transmitted through skin-to-skin contact, making oral sex riskier than ever. The characteristic warts of HPV are also contagious, either by directly touching them or by coming into contact with a surface that touched a wart (fomites.)

Family history can also come into play. As a matter of fact, most people will have higher odds of contracting a disease if one of their parents had it. That being said, in the case of oral cancer, studies show that the elevated risk is slight.

Still, if you know that one or more relatives have suffered from oral cancer at one point or another then taking some preventative measures such as reducing alcohol intake or quitting smoking certainly won’t do you any harm.

Sadly, immunosuppressants are a necessary evil if you’re enduring an organ transplant to ensure that there are no adverse reactions. Various diseases such as multiple sclerosis and HIV/AIDS can also suppress your immune system. 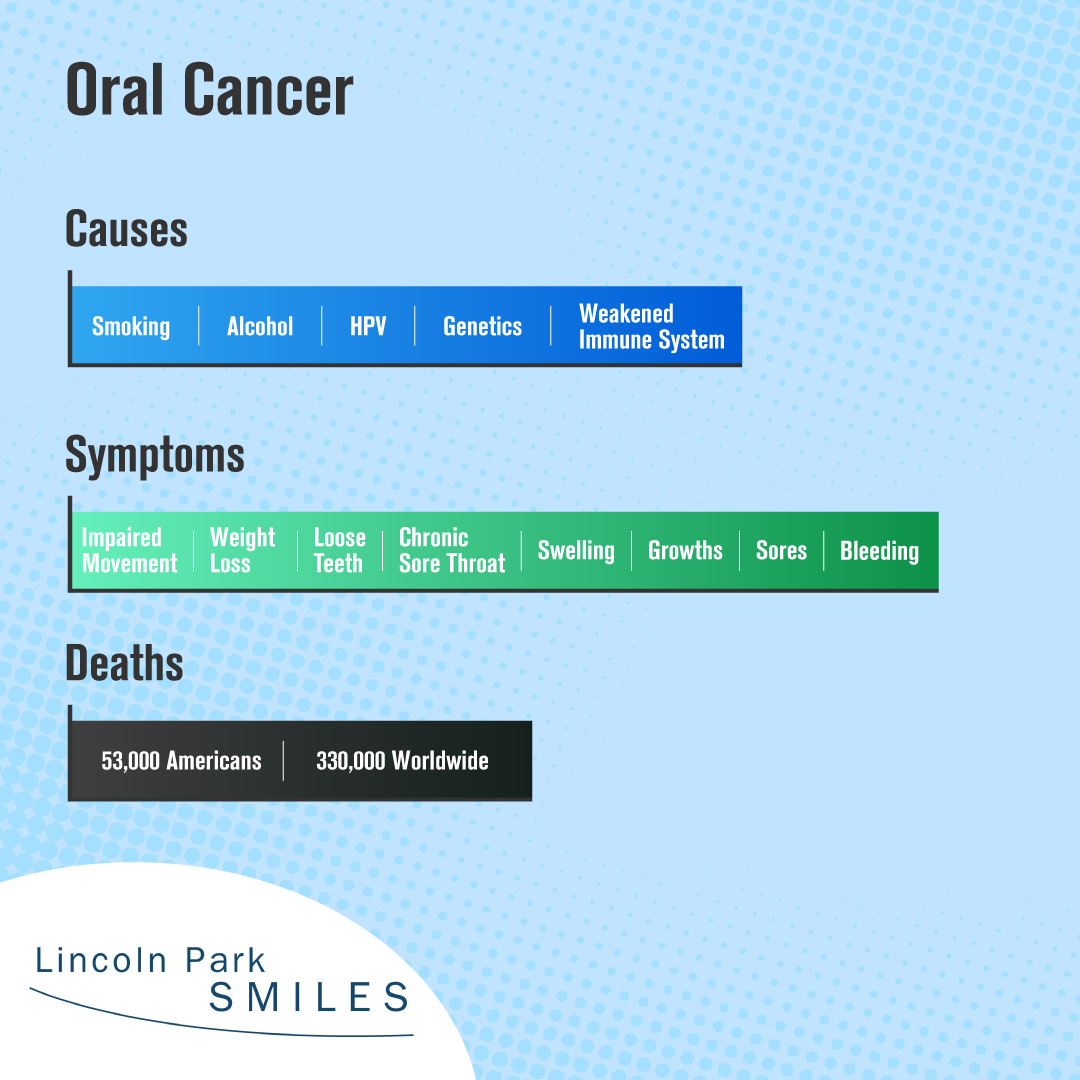 Early detection of oral cancer will give you the best chances of beating it. After all, when dealing with one of the most aggressive cancers known to man, nipping the problem at the bud is the clear solution.

Of course, catching it early is easier said than done. Fortunately, there are some things that you can do to increase your odds of detecting the problem before it goes beyond the point of no return.

For one, going for regular oral cancer screenings can help your dentist spot any warning signs such as precancerous lesions. These screenings don’t require any special preparation so there’s no reason to not do them.

An advanced form of screening uses VELscope technology. The VELscope is a non-invasive device that helps dentists catch red flags that are otherwise invisible to the naked eye. Not all clinics use this, but we at Lincoln Park Smiles incorporate it into all dental checkups.

Even the smallest of sores or specs that are barely visible could actually be precancerous — in which case, early detection could mark the difference between life and something less ideal. By allocating some time to oral cancer screenings, you’ll safeguard years of your life.

Sadly, not everyone is lucky enough to catch oral cancer early. These are some of the symptoms that a patient suffering from late-stage oral cancer may experience:

Cancer is essentially the polar opposite of a healthy cell so it should come as no surprise that otherwise mundane activities such as talking or chewing may become increasingly difficult as the disease progresses. The impaired movement may affect the jaw, tongue, or both.

Unexplained weight loss is one of the characteristic symptoms of oral cancer — and other types of cancer, for that matter. This shedding of pounds usually progresses rather rapidly as the condition goes into its later stages.

Another common symptom of oral cancer is chronic sore throat. Dealing with a sore throat for a day or two is bad enough so imagine having to deal with it on an ongoing basis. Some patients with oral cancer have described the sensation as having something lodged in their throat.

Bleeding gums are generally attributed to conditions such as gingivitis, but oral cancer patients will often experience it too. The key difference is that cancer-induced bleeding tends to persist for extended periods of time rather than subsiding with the introduction of proper hygiene.

Oral cancer is a scary and very real danger, but you can protect yourself from it by making lifestyle changes such as drinking less or not smoking.

Furthermore, taking regular trips to the dentist can also lower your risk level since it will help you catch precancerous changes early.

If you have any questions about cancer, health, or oral hygiene then don’t hesitate to call us today at (312) 236-9325! Remember, healthy teeth make for a happier smile!